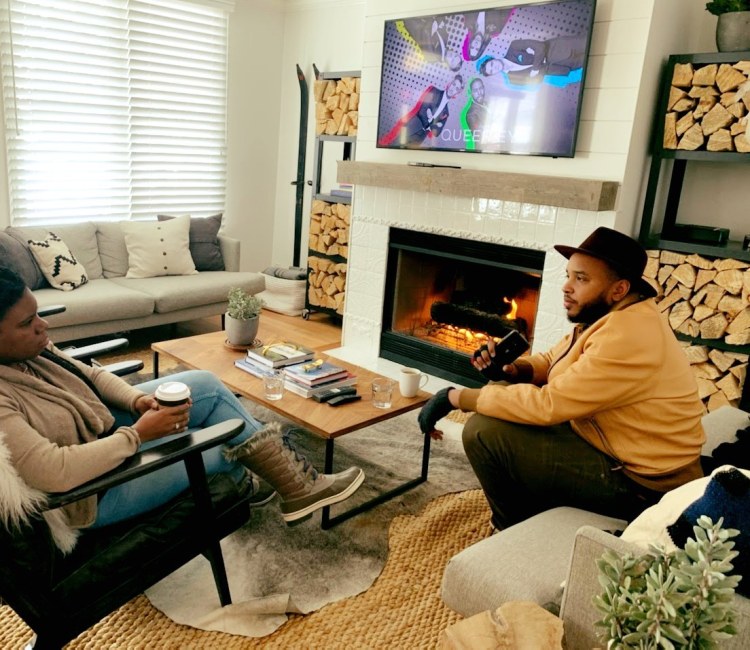 Editor’s Note: We want to send warm appreciation to Sundance Institute and the Press Inclusion Initiative for inviting me to Sundance Film Festival. I took the opportunity seriously and was able to engage in some very engaging conversations with the world’s leading Black independent filmmakers and writers. Justin Simien is one of those people. This interview with Justin was one of the highlights of the festival for me. The world premiere of his upcoming film, Bad Hair brought a very complex and scary examination of the Black female identified experience in modern American culture. After witnessing and genuinely appreciating the success of Dear White People, I wanted to talk to Justin about his thought process, and the creative and aesthetic reasoning behind the creation of his new horror film.

Filmmaker, Justin Simien made waves with his debut film Dear White People in 2014 after winning the U.S. Dramatic Special Jury Award for Breakthrough Talent at the Sundance Film Festival. The comedy that chronicles the experiences of Black colleges students attending a predominantly white, Ivy League college went on to become a Netflix original series, making Justin a successful television writer. This year. Simien returned to Sundance Film Festival 2020 with the world premiere of his complex horror/comedy film entitled Bad Hair.

Bad Hair takes place in Los Angeles in the 1980s, when New Jack Swing was taking over the airwaves in Black culture and ushered a new hair technique called the “weave”. When lead actress Elle Lorraine (Anna) is pressured by her boss played by Vanessa Williams to straighten her natural hair. After she is made over by an evil hair stylist played by Laverne Cox, a nightmare of her hellish weave unfolds.

Justin Simien sat down with Publik / Private 48 hours after the sold out premiere of Bad Hair in Park City, Utah Sundance Film Festival 2020. He talks about the complicity of Black identity in film, including his own, which horror films influenced Bad Hair and how Black woman play a leading role in his cinematic endeavors.

After having success in comedy/drama, what made you pursue making a complex Black horror film?

[Bad Hair] does a lot and is trying to present a lot. So, I wanted people to come to it from their own subjective experiences. When you’re coming to something like Sundance, the conventional wisdom is like, “Drop it. See what the people say and what they do.”

Did your initial inspiration for this film come upon you the same way as Dear White People did?

I think so. I think the same thing that makes me scared is the same thing that makes me want to do something. I feel like what I can’t help as a filmmaker is to go to the spaces that feel unexplored and edgy. If you look at classical psychological thrillers or horror movies, which of course, are white because that’s the dominant society, but if you look at Rosemary’s Baby, Carrie, Body Snatchers or The Shining, the actual thrills of the movies are fun but the things that keep me up at night are the things that the films are saying about life.

I feel like Rosemary’s Baby is about the vulnerability of a woman who has the responsibility of giving life and literally keeping the species together. But while she’s in the most vulnerable stage of a woman’s life, giving birth, she is at the whim of all of these men. And The Shining, which is a film I’ll never stop watching, means something new to me the more I watch it. That’s really something powerful that this genre can take on these deeper topics, but they do it subconsciously. They do it to you in a sneaky way. They interrogate society and popular opinions through the guise of a thrill ride. I thought it would be really interesting to do that, but to take it to a Black place. Black people traditionally have not been able to make movies like this. And if we do, we’re not able to make it at a big scale.

Did you have to do a lot of research on Black women’s hair in order to make this film?

I was talking about a movie called The Wig and Extensions with my producers and I went home and started doing research into weaves in particular. It felt like 1989 would be an interesting time to explore. I started coming up with this treatment and then, Get Out happened. Then I was like, “[Now] there’s a genre and a market place for this thing.” Even though the show (Dear White People) was still going, I just went for it. When I realized the audience that was showing up for Dear White People the most were Black women, the strategy I applied in that case was to surround myself with Black woman to keep me informed. And also, I wanted to make sure the heart of that story was going to come through authentically.

I treated my Black female friends, who were cinephiles and understood how a script was put together to a four day weekend in Palm Springs. We went there and had a lot of conversations. I realized the hair itself is the horror element.

What did the women on the vacation tell you?

The more we talked, it was like the choice to get a weave or not to get a weave was not the point of the movie. It’s interesting that we’re living in a society that feels like choices are presented to us, but they aren’t really choices. Anna (Elle Lorraine) is basically told get the weave or lose your job. That’s not a choice. It doesn’t matter aesthetically why she made the choice, she had no other choice to make but to go to this particular hair salon, at this particular time and in this way. I wanted to create something that viscerally put people in the shoes of Anna and of any marginalized person trying to navigate society where you don’t really get the system.

Let’s unpack Black Hollywood because Anna is a young Black woman trying to make it in Hollywood. Have you been paying attention or looking at Black women in this circumstance from the outside looking in?

I like going into spaces to start conversations I think should be happening, and that should be bubbling up into popular culture level. For me, I thought it was interesting that in this capitalistic American society, we’re presented with culture that is slowly conditioning us to want certain things. What I thought was interesting, particularly in 1989, Black culture was aspirational. It was so much about wanting to show that we were just as good as, and that we could make just as much money as. Boomerang (1992 film starring Eddie Murphy) is like this amazing fantasy land where everyone is upwardly mobile and Black. But it’s aspirational.

In saying something about that time period, I feel it’s similar to where Dr. Martin Luther King Jr. got to at the end of his life. He had fought so much for integration, erasing the color lines and being included in this American dream, but then shortly before he died, he was like, “What a minute, this is a burning house we are trying to integrate into.”

What kind of debts are owed in this American experience are taking on because we have been conditioned to aspire to get into this house?  I wanted to say something about how our culture, as we present ourselves, is sometimes in line with what the culture is conditioning us to aspire to: “I got the hair, I got the job, I got the life that I’m seeing Sandra (a famous pop star in the movie played by Kelly Rowland) play.”

Once you make it into that box, you have to give up things to get there. I wanted to interrogate all of those things, and look at it in three dimensions.

How do these questions and interrogations affect you personally?

What parts of myself will I never know? I only have a certain amount of time on this earth. We are always presented with these boxes that we want to be in. I feel like that’s my American experience. It’s very poignant.

How did you assemble the amazing cast in Bad Hair?

The cast was a journey. There were some people that were already in the circle that I love to work with over and over again. Elle Lorraine is someone I went to high school with. Folks like Blair Underwood, Vanessa Williams, James Van Der Beek and Laverne Cox came from our casting director, Carmen Cuba. A lot of it was people responding to the script and what the movie is trying to say.

There were also lot of in person conversations about what we were going to do with this film and connecting to the message. Casting Vanessa Williams is not an audition, it’s a sit down conversation asking how are we going to do this as people and artists, and tell this story together? James Van Der Beek was like “I know I am the white guy in this movie. How can I use my work as an actor to support the story you are trying to tell?” It all felt like I was experiencing soul connections.

Is Bad Hair a cautionary tale?

No, I don’t think it is. I think it’s an invitation to have a really complicated conversation. I don’t have the right to tell a cautionary tale about a women’s life. I wanted to make a movie that made you watch it multiple times, and talk about it and fight about it. I think there’s a lot to unpack. I love movies that leave a lot to unpack. I feel like those movies never have our stories in them. I like movies that are complicated and messy that send us into the world having to figure things out. Those are kind of things that get me excited.

Are you a Black feminist?

I think so. It’s a delicate line because I don’t want to appropriate another person’s experience, but I feel like Black female cinema is the most exciting aspect of cinema. One of the joys of getting to do Dear White People is taking the film executive mindset and saying, “No, we should be hiring Black women.” That is one of the things that excites me.

So, I think I am, but I also don’t want to take that label.

What in your history made you so fascinated and connected to Black women?

As a gay Black man, Black masculine culture did not have space for me. To be a Black man and to be gay were things that were not allowed. I think this is true for a lot of gay Black men, where we get to find ourselves through the women who raised us.

The women in the film are all named after women from my family. My mother, Anna raised me. My aunt Zora introduced me to horror films. . My aunt Edna gave me my audacity and my aunt Vergie gave me a sense of wisdom and compassion. Those are the women who helped me find myself, and I end up telling stories about them.