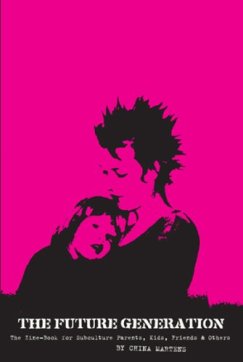 I’m about the same age as Clover, the inspiration behind the 90s underground parenting zine, The Future Generation. She is 28 and I turned 30 late last year. My mom is nothing like her mom, the anarcho punk momma essayist, China Martens. My mom is not a punk. I became a punk because I found out about Riot Grrrl through a book about Kurt Cobain (maybe earlier around 12 years old, but I remember when I became truly aware of the movement at 14 or so) and was a little jealous of one of his first girlfriends who made zines and seemed super cool. Legend has it, he wrote song about her called, “About A Girl”, a song I sang off key one time as karaoke in a deadhead bar in a small mountain town in Colorado when I was 19.

Anyway, I like China and her writing because it’s out of the box. I like everything that defies the binary, breaks patriarchal social codes and tells the unadulterated truth. The Future Generation: A Zine-Book for Subculture Parents, Kids, Friends and Others is a well printed anthology of the 14 issues of her self made zine that spans over 14 issues and 17 years. You can read and watch Clover and China grow up together and it is quite incredible.

China is a sweet writer and a hardworking mother who was acutely aware that motherhood sucked – correction, through her experiences it was stressful to align her reality with her beliefs and lifestyle as a radical punk, and to make ends meet for Clover and herself. Nonetheless, the anthology is deeply touching and eye openingly intimate.

All in all, I find the book to be  a small miracle for weird girls. a) I don’t have kids because I suspect the truth that raising a kid as a radical woman is super hard and no one has ever told the truth about it except for China. b) She gives you the opportunity to check into reality in a way you’re not quite prepared for. c) she shows you how much empathy she had for other mothers as she worked to find solidarity in her lonely experience, convinced that there were other young women like her who needed a support system and network through her zine.

My favorite scene in the book, as it is very evocative is when China describes picking up kid having a tantrum on the floor of a grocery store while the mother paid for their food. I would do that for a struggling mother. I’ve picked up kids and carried them while a mother tried to get three tinies down steep subway steps in NYC. I identify with her. I am not a mother of my own kids, but my instincts are similar because what people don’t usually get is that punks are majorly about community and solidarity. We’re all about helping people. Contrarily, China writes about how her friends meant well once she became a mom, but they just didn’t know how to handle her new life. Early on she moved from place to place with Clover hoping to find house mates who would be sympathetic and healthy for her child’s needs and personality. Clover was a touchy child and cried often if not in a comfortable environment.

My favorite zine issue was Issue Five, Part 3, “Sex and Violence”. It speaks about the massive inundation of violence within children’s cartoons compared to the shyness and quiet a love scene invoked in children when they witnessed a scene as simple as kissing on tv. It speaks openly about child abuse and how parents should attempt to navigate and protect from it by allowing children to draw boundaries that are comfortable for them without silencing them to a point where they can’t speak up if they are being violated. It’s such an important topic.

The zines can be heart wrenching, but that’s what it’s like to be a single mom who doesn’t fit in with social norms. That’s just the way it is and in reading this anthology, you not only understand, but you grow comfortable in China’s discomfort. The most important moral of this anthology is that she doesn’t give up. You watch her make it through motherhood…which of course motherhood doesn’t end at 17,  so I should express that she makes it through an important phase of her and Clover’s life.

Atomic Books and China Martens are working to print the second edition of The Future Generation: A Zine-Book for Subculture Parents, Kids, Friends and Others which was originally printed in 2007. I’d like to advocate for their success and ask you to donate to her Kickstarter so young punk and outsider women everywhere can find solace as mothers, or take this book as a cautionary tale – not that Clover’s existence should be or should have been avoided, but if you consider yourself a radical young woman, China reveals to you what your life could be (in the 1990s. Things are a bit different now, but the core of mothering is timeless). That’s neither a good or bad thing, just a teaching moment.

She and I will be speaking at Red Emma’s Coffee Shop and Bookstore in Baltimore on February 23, 2017 w/ the co-founder of Philly Birth Project, Olivia Baxter, the Executive Director of The Baltimore Transgender Alliance, Ava Pipitone and the amazingly beautiful mother from another planet, Olu Butterfly on the topic of Child Inclusiveness in the Arts and DIY Reproductive Health. Join us at 7:30 pm if you’re in town.

You see, I truly love my mom who has set a nice tone for me in life, but China and I are on the same mission even though we’ve had different experiences. We’re radical women, punk grrrls for life, so this conversation is going to keep going as long as we and women like us can help it.