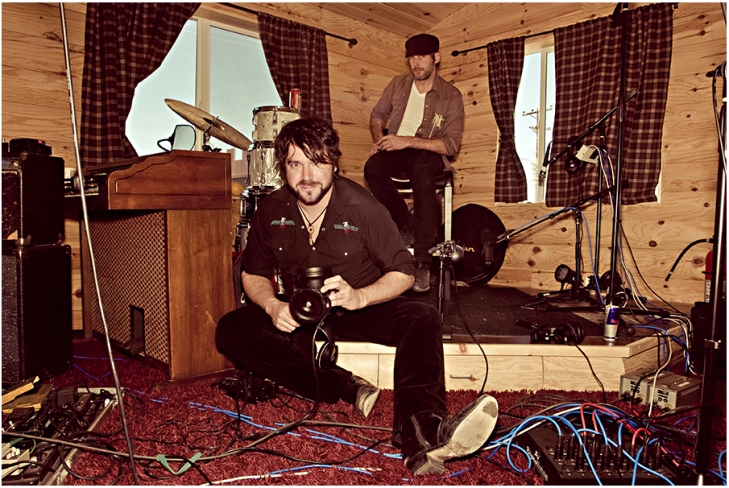 Kirpatrick Thomas is an original member of the brilliant desert psych western band, Spindrift. If you’re into the explosively popular underground neo psych genre that stretches across every continent on the planet, particularly North America and Western Europe, you’ve heard of Spindrift.

I asked Kirpatrick Thomas about his perspective on being an underground rock hero, his career, which includes a massive publishing deal and his relationship with up and coming bands. He was open, endearing and humorous. We’re always excited to talk to our favorite musicians! Check out what he had to say:

What do you think it takes to have a dynamic underground career?

I always tell people it takes two things: perseverance and passion – passion to believe in what you love to do, and what you were born to do, and perseverance to keep up the discipline and get through the rough times even when it seems like a waste. If you can stick with those two elements and tread through the rough waters, you can accomplish almost anything.  It takes time, but having the passion to do your best will prevail in the long run.

How do you keep such a classic style of music current and interesting to your audience?

By initiating new ideas into an old style we keep it fresh. When you deal with classic folk, western, country, blues, mariachi, Celtic and other older styles, the easy part is relating them to today’s society. They are just sitting there waiting to be adapted, ripe for the picking. You just need to address them to today’s world. Make it present and futuristic, not stuck in the past, unless that’s what you’re going for.

Do you have an interest in the Wild West historically? What fascinates you about that era?

I am currently reading “The Last Gunfight”. It’s about the OK Corral and how the repercussions of that particular gunfight reverberated through America, and practically brought a halt to the Cowboy myth. Obviously, we demonstrated our love for the factual Wild West by touring and documenting our journey across the Western USA during our “Ghost Town Tour” of Oct 2012 in the upcoming feature documentary film, “SPINDRIFT – GHOST OF THE WEST”. I find the Wild West to be soooo fascinating on many levels. First, there’s the fact that as Americans, this is our real history: what made us, who made us and why and how it happened.  The Gold Rush, the Pioneers, the Native American plight and the transcontinental railroad. Then there is the vast beauty of the West, the wonder an awe of it. From the plain and simple landscapes to the record breaking natural acts of the shifting Earth, the silent, peaceful, yet deadly terrain, it’s creatures and its features. Then finally, there is the myth of the West: the stories, the music, the movies, the people, the characters and caricatures, all of these elements are endlessly fascinating. The best part is actually being here to see it and live it out and to perpetuate its legacy in history.

Are you working on any projects lately?

Our latest project, the film, SPINDRIFT – GHOST OF THE WEST, has been quite a bit of work. We are doing everything we can to see that the release of the film will do the best it can. It’s a beautiful and remarkable movie that logged hundreds of hours of footage which has been edited down to 1 hour. I have to hand it to our director, Burke Roberts and his crew for seeing it through!  We are also updating the soundtrack, which originally came out on Tee Pee Records in Oct 2013 for a re-release of sorts. We did the same with our film The Legend of God’s Gun in 2008. Also, since we signed a publishing deal with Chrysalis/BMG last April 2014 (one of the world’s largest music publishers), we’ve been adding new songs to our soundtrack catalog….most likely to be heard on Classic Soundtracks Vol.3? Finally, we are organizing, ROCK FORMATIONS FESTIVAL PART 2 to be held in Wonder Valley, CA at The Palms on Sat. Aug 23rd. It’s a SPINDRIFT curated festival of sorts. Whereas we get pick the large diversity of acts we feel have all significantly influenced us in one way, shape, or form.

How does it feel when you play with newer or younger bands? Are you still intrigued by new live bands, do you pay attention to early sets during your live shows?

Yes, I most definitely pay attention to all the newer/younger bands! We just nabbed our new guitarist, Thomas Bellier from the new/young, band Blaak Heat Shujaa after touring Europe with them last Summer! Funny thing is, I still see SPINDRIFT as a new and younger band. I guess it’s just the state of mind I’m always in, or maybe it’s because we are still an unknown type of band, underground and cult in a sense. But as for the really young up and comers, these are the folks who are coming along to take our jobs away after all!

We gotta stay in it, above it and underneath it at all times! I especially enjoy the vitality and enthusiasm of these younger acts, but it sometimes saddens me to know that most break up within a year. A.D.D, social media and smart phones have taken many a strong young minds. I’ve seen band members drop off and fall through the cracks quite a bit. Usually, it’s because to them, what was a cool new idea doesn’t seem so new and fresh anymore. This takes me back to your first question about having the passion and perseverance to persist and see things through. I really envy a band like The Dandy Warhols,who contains pretty much the same 4 members since they started 20 years or so ago. That’s a true testament of comradery, maturity and growth over time. It is a rare thing these days. Respect your elders folks! Then rebel!

Which bands are you listening to right now?

I am currently listening to “Sword” and “Crucible” by Flesh and Spirit, who is also known as, Dan Kerrigan. His stuff is genius. Unfortunately, the guy is so anti-social, I don’t know how to show any of his stuff to ya’ll. Hey Dan! There’s this thing called YouTube and social media, please stop depriving us of your music! The world will be a better place when we are blessed with your tunes! Don’t be shy!

How do you guys usually compose songs?

I’ll be in the shower. I’ll hum out a melody. I’ll play that melody on guitar. Then, after some troubleshooting, I’ll add a second melody to it, then I’ll work on arrangement variations. I particularly enjoy exploring variations on a theme (musically and conceptually speaking, that is). Then, I’ll record the various ideas as a demo, play them for the rest of the band to see if they fly (its usually a %30 chance they will work at this point). Then ee go from there.

Once the song is “done” its not even “done” until we’ve performed it live a hundred times or so. Then it’s time to record, release, play it live for the masses and let it settle to see how it takes form in society. It takes a long time for a tune to become a “real” tune. Oh, what a tangled web it weaves.

Honestly, I have to say, everything. To me, 2014 has been the best year for SPINDRIFT to date, without a doubt. I really LOVE being in this band. It’s the best musical act around in my book. There is nothing that I regret. I am fully blessed with a creative gift and forever grateful for that. I only hope that I can use this gift to its fullest potential and finally quit my day job so I can write songs, tour, record and produce for this band for the rest of my life 24-7! Bring it on 2015 and beyond!

Ghost of the West American Tour 2014

Ghost of the West European Tour